La-what? Lacrosse and meeting a person on the street.

It always starts like this.
The classic conversation with a stranger I meet on the street, and then I have to explain the name, with enthusiasm, as if it were the first time.
“It's called Lacrosse, and it’s all one word. “
The name is of French derivation and comes from the rod of a shepherd - in French crosier -, the cane with a curved end used by bishops in ceremonies.
I continue: "It's a kind of hockey, but it's played on the grass and in the air".
Maybe it's a confusing explanation, but it's short and effective.
“Imagine a hockey field. Now enlarge it and make it the size of a regular football field, plant some grass in it. Take two goals, 1.8 meters by 1.8 meters, and place them at the far end of the field, but about ten meters inwards.
Put two teams of ten players on the field, each holding a stick with which he/she can pass the ball in the air.
The purpose of the game? Scoring: whoever scores the most goals wins. 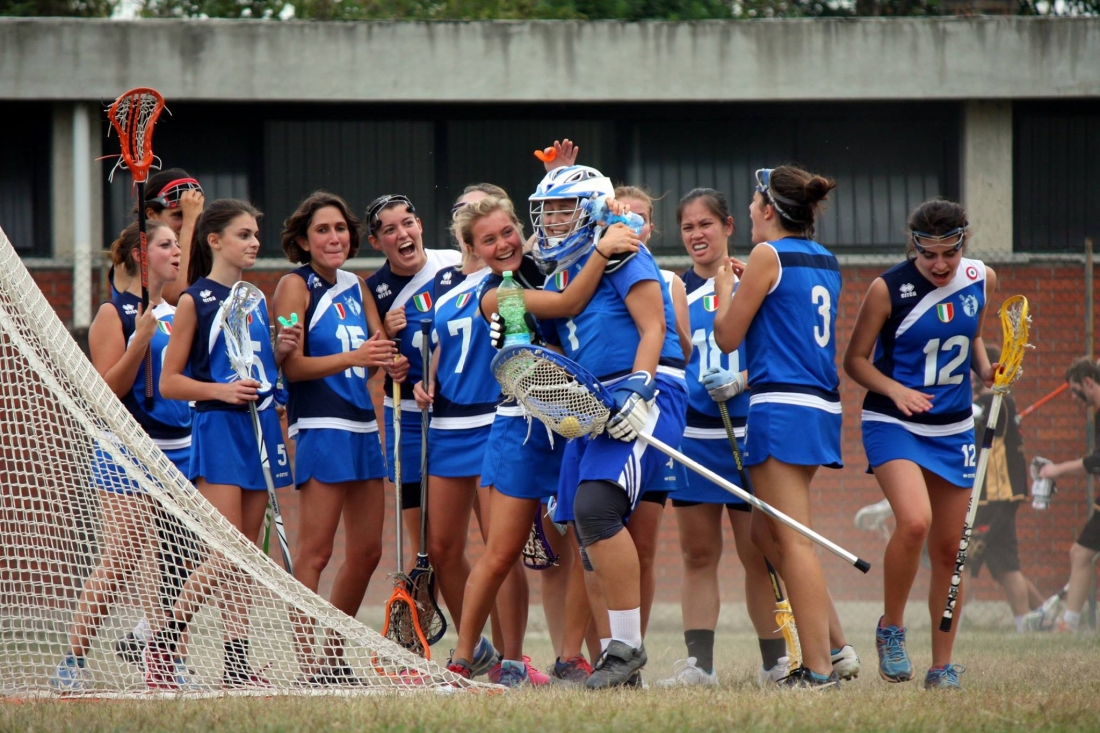 "How did I come up with playing, you say?"
It was 2009, just another year in which I would have picked up any old extracurricular activity and then tried another the following year. Then, In October of that year, I met Silvia Di Stefano at the Sempione Park in Milan, who, returning from a study experience abroad, was recruiting some friends to put together a Lacrosse team.
I soon discovered that there were no women's teams in Italy at the time. So, as we learned how to hold the stick and receive the first passes, we inquired about how to become a fully recognized team, an A.S.D.
The A.S.D. Lacrosse Milano Baggataway was officially born on September 28, 2010.

From those early years I remember that every place was the practice field. Parco Sempione, the San Siro mountain ... places in Milan where we literally took our first steps.
The first problem was the equipment: where could we find it? We found a German site and ordered the basics. Unaware of this, I played for the first few years of my sports career with a child's stick; that is, a stick shorter than the standard adult size.
In May of that year, we met an American team visiting Italy: the women’s team of John Hopkins University. It was like the pick-up football team were training with Real Madrid, you know ?
Perhaps that was one of the moments where we understood what it meant to be able to really play, move the stick as if it were an extension of one's arms and master all the movements of the game with extreme ease. The first tournament we participated in came a year later: we finished last in Bratislava, in 2011.
At the end of that same year, the women's division of the Roma Leones team was born, the Roma Leones Women’s Lacrosse Team, the historic rivals of Milan. In 2012, we played a first official competition - the Coach Cibe trophy - raising our first cup to the sky. I had seen it done but I didn't know that emotion, that all-encompassing joy that intoxicates the moment. No matter how many successes you have, you never get used to that feeling: every game is different from the others and the path that led you to prepare for it will never be the same as the previous one.
We began to travel to Switzerland and Germany, where the women's lacrosse movement in those years was already almost consolidated. 2013 was the year of the first women's tournament organized and hosted by an Italian team, in Nettuno, south of Rome. And that year, in the municipal stadium Danilo Martelli in Mantua we played and won the first women's Italian Cup.
The 2013/2014 season represented a turning point: teams were started in Perugia and Turin, two cities where the men's movement was already present. It was in that year that FIGL - the Italian Lacrosse Federation - organized the first Italian championship. In 2014 we organized the first tournament in Milan, the Mediolanum Cup, which was a success: teams from Switzerland, Belgium and Germany came.

What really made the difference in those early years were our teachers: Students in Italy for Erasmus or professional coaches who flew here from abroad for a weekend. Each coach contributed to building that same team that today counts five league titles in the Italian championship.
Since then, movements have sprung up in Imola and Bologna, although not all of them are still alive today. From 2014 until the 2019/2020 season, an Italian Championship has always been played, from November to April / May, and then left room for the Italian Cup in the summer. At the outbreak of the first wave of Covid-19, in February 2020, the competitions and training were suspended - not only in Italy, but in most European countries - and the 2019/2020 Italian championship was not awarded by FIGL because the number of games played was less than 50%.

Thanks to collaborations with some Milanese high schools, including the L.S.S. Leonardo and Vittorini, ITT Artemisia Gentileschi, municipal initiatives and local proposals, social networks and TV series in vogue among the teens, Lacrosse is increasingly popular. Every year we have succeeded in getting new recruits and keeping this small Italian movement alive.
Ours is a story like many others; it’s about ordinary girls who have dedicated themselves to a cause and who with patience, dedication and passion believed they could create something bigger, something that could last.
In short, this is what I would like to say to the people I meet on the street who ask me: "What is this racket for?"